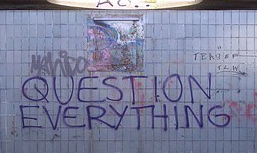 In a Stanford study of millionaires, when presented with a) a cockroach and b) a poor person, a shocking 93% had the same chemical reaction.

In 2008 a Wal-Mart employee was killed by a stampede of Black Friday shoppers, the company refused to compensate his family to this day.

Since the inception of the World Bank in 1944, the gap between rich countries and poor countries has increased by 3 fold.

Of the $8.5 billion in diamonds that come out of African, only $450 million actually benefits Africans.

The Walton family is worth $100 billion yet it has given less than 1% of its wealth to charity.

The Caterpillar Company provides Israel with 400 bulldozers each year for the sole purpose of destroying Palestinian homes and lives.

Monsanto has driven 8000 poor farmers into bankruptcy by aggressively enforcing its patents on human food.

The mass media loves labeling humans as consumers; for every usage of the word ‘citizen’ in the media, there are 76 usages of ‘consumer’.

in the last year, they have also doubled world hunger.

Starbucks coffee farmers would need to work for 3 days before they could afford to buy a cup of their own coffee.

Monsanto has a revenue of over $10.5 billion per year, yet it is currently suing farmers in poor countries who make less than $500 per year.