I attended this hugely entertaining debate at the Royal Institute of Great Britain full of questions of my own.

I stumbled upon neuroscience well over a decade ago at the same time as having a eureka moment realizing that the way most companies sell is outdated, heavy-handed and massively unsuccessful. I started to research what advances had been made by science in the field of selling and found neuroscience, it was love at first sight. So to say I was looking forward to this evening of neuroscience would have been an understatement.

Neuroscience basically measures the electro waves in our brains as we respond to stimuli and identifies which areas of our brains this electro energy travels to. Each area of the brain supposedly correlates to our feelings and emotions.

The first speaker was the fabulous Dr AK Pradeep who looked more like a rock star than a scientist and played his part on the evening not dissimilar to the Jeff Goldblum character in Jurassic Park.

He spoke with considerable authority, charm and fluidity using no discernable notes and he was not over reliant on the ubiquitous god-awful power point presentation either. He easily subjugated the audience as he paced the stage making his points and backed up his arguments with real sales data from his work and humor, I could have listened to him for hours.

Dr Pradeep’s basic theme was neuroscience does work although in its infancy and he can prove, that using it brings in more sales for companies.

Next up was Graham Lawton (deputy editor of new scientist) who explained what happened when the New Scientist used neuroscience to decide which of the three proposed covers of the magazine would bring them more sales. Mr Lawton came across as hugely likeable but the presentation seemed a little flat possibly due to it being heavily reliant on the evil power point.

Finally it was the turn of the skeptic on the night, Dr Mike Page who played Ian Hislop to Dr Pradeep’s Jeff Goldblum. Initially I thought Dr page was going to be dreadful as he spoke so regressively but I was wrong, he was brilliant. His basic argument was that neuroscience was the new emperor’s clothes and there was no scientific data to back up any of its claims.

He did not use the power point (hurray!) but instead relied on old school notes written on cards. Dr Page’s counter reasoning’s were razor sharp, solid and hilarious. He didn’t hold back at all and was cutting in his criticism of Dr Pradeep’s arguments, which made for excellent questions later as the 2 stood toe to toe.

The night was entertaining and informative but as I shuffled out of the opulent Royal Institute, I had some unanswered questions.

Is it ethical to use such technology to identify our buying motives so transparently?.

In an age of so much consumer debt do we really need some cutting edge black art that enables companies to sell us more stuff we don’t need?

Check out this totally brilliant sketchbook of the night done by the rather fabulous yahnyinlondon. 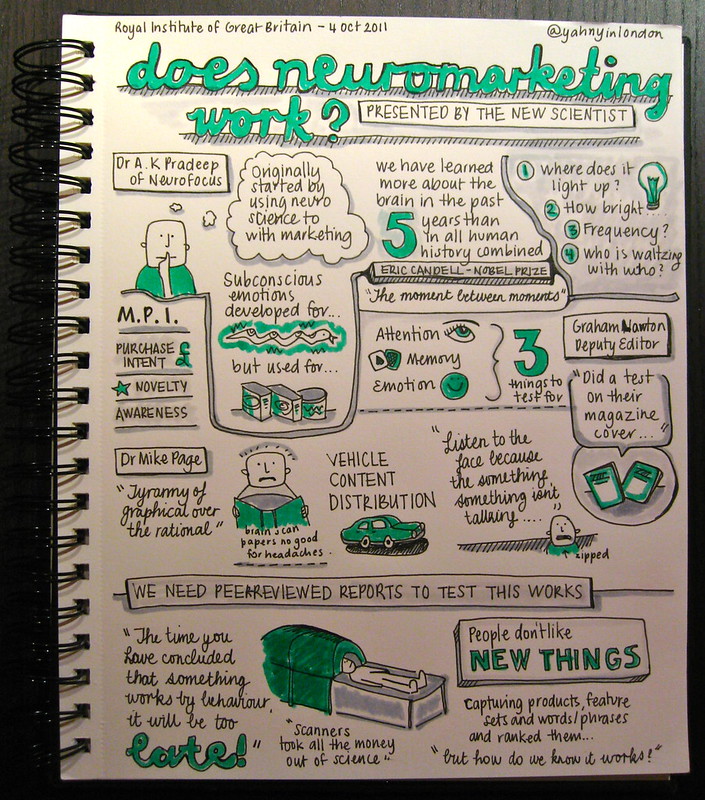